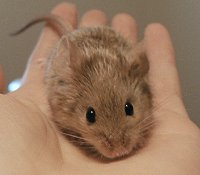 Tut was Africa’s grandson. Unfortunately, we learned after she was bred that Africa came from a line of relatively short-lived mice, and after Tut was born his ARM father also died young. He had the odds stacked against him, and it meant a short life for this beautiful boy. Tut was a very special little mouse. He came home with us at only 3 weeks old, and was almost unhandleable – he was an adorable little nut. I started a program of handling him multiple times a day, and every time I fed the gang, he would ride around on my shoulder. Within a few weeks, he was standing on his hind legs waiting to be picked up. Nothing could cure him of his nuttiness, though – not that I would ever want to! He spent his time plotting to escape and attempting to chew through the metal bars of his cage. He was also the only mouse that my non-rodenty-boyfriend really liked. Tut was a very special little nut, and I will miss him terribly, all the more because of his sudden and unexpected death.