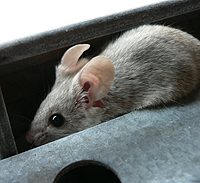 Willow was one of the most well-known Zen mice of current time. She did beautifully in shows and with her single litter. Although she was from a different branch of the Zen line (through Ciaran and Lugh, instead of Velvet and Gossamer), she follows in her family’s footsteps as a gregarious, bossy chinchilla girl. There’s one in every litter! She was one of the alphas of the cage and enjoyed all aspects of mousey life with vigour – from running in the wheel to devouring food to escaping at playtime. She was named for Willow from Buffy, as her mother was called Drusilla. When she won her Grand Champion title at the Sydney Royal Easter Show, 2009, she became the poster girl for ‘what a female mouse should look like’. She was very special, widely loved, and will be greatly missed.