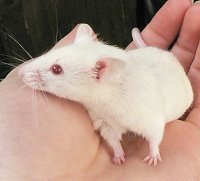 Last of the three brothers is little Geiss. As a young mouse, we was smaller and not as strong as the other two, but he made up for it with personality. He was always first out of the cage at playtime, and will run and bounce over anything he can reach. He was into everything, and would just as happily run over me as the cage, the floor, or into the food bin. He was a funny boy – and as he grew, he became just as big and strong as his brother. He, too, was named after a basilisk character in Graham Edwards’ series.